The Showroom is closed due to COVID-19. All online orders are shipping normally with UPS.
Menu
The Effect Factory > Boutique > Alexander Pedals > Radical Delay II Plus

The Alexander Radical Delay II Plus is here to remind us what was cool in the ‘80s: digital delays, crude pitch shifting and arcade games. There's nothing else there, trust us 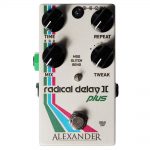 The Alexander Radical Delay II Plus is here to remind us what was cool in the ‘80s: digital delays, crude pitch shifting and arcade games. There’s nothing else there, trust us.

The « Plus » in the name refers to a tap tempo feature that overtakes the Time knob, and there are two ways to access it. One such way is holding down the footswitch to enter Tap mode; you can tap in the tempo, then hold it again to exit. There’s also a Tap jack on the side, where you can connect an Alexander Tap Tempo box (sold separately).

The Radical Delay II Plus has three modes, and all three of them are about as ’80s as it gets: Mod, Glitch and Bend. The most straightforward of all these modes is the Mod setting—it’s a crystal-clear digital delay. Keeping the Tweak knob at noon preserves the clarity, and turning it left or right adds vibrato or chorus modulation intensity, respectively.

Glitch mode sounds like a Pac Man or Gorf arcade cabinet on the verge of meltdown. With the Tweak knob fully counterclockwise, it’s as clear as Mod mode, but with one turn of the Tweak, glitchy madness and pitch modulation awaits.

Those familiar with ancient pitch-shifting technology will likely remember the Bend mode very well. With the Tweak set at noon, the repeats are clean as a whistle. To the left or right, however, each repeat is shifted up or down an octave. Each subsequent repeat is also shifted, for a spiral of octave-down notes or an uplifting digital crescendo.

Turning the Time knob down turns off the delay and the Radical Delay II Plus gets just plain Radical. The Glitch and Bend modes can be used as modulators, as can the modulation from Mod mode. There’s a lot going on here!