The Showroom is closed due to COVID-19. All online orders are shipping normally with UPS.
Menu
The Effect Factory > Store > Origin Effects > RevivalTREM 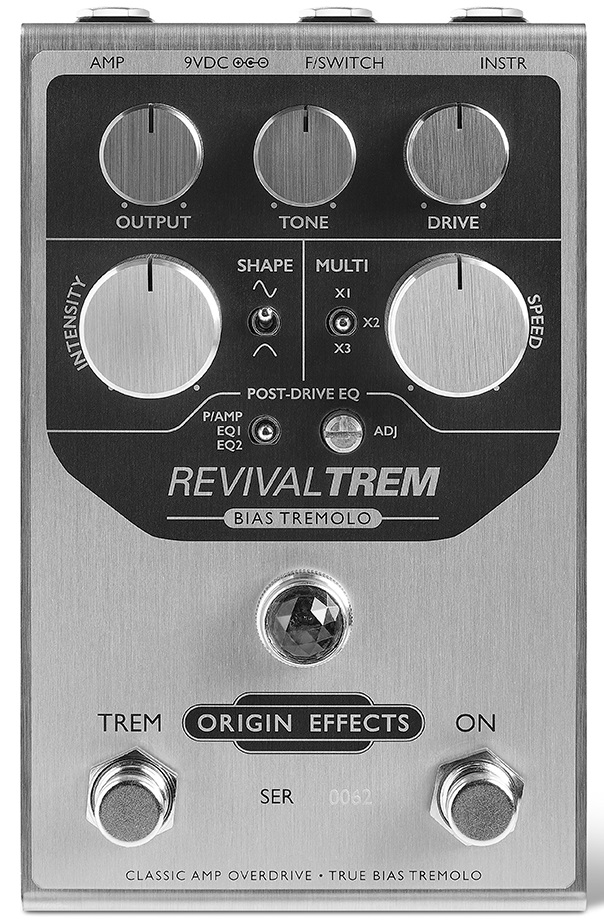 Based on the RevivalDRIVE platform, the RevivalTREM houses a complete valve amp-style signal path recreated in all-analogue electronics. Total :
There is products in your cart.
The shipping costs will be calculated during your order.

Based on the RevivalDRIVE platform, the RevivalTREM houses a complete valve amp-style signal path recreated in all-analogue electronics.

This allows it to recreate the uniquely musical and dynamically responsive bias tremolo effect at circuit level, while also offering a broad palette of stunning clean and overdriven amp tones voiced after the Brown Fender Deluxe.

Smooth, deep and rich, bias tremolo is considered by many to be the pinnacle of built-in amp trem. In contrast to optical and VCA-based tremolo designs, which attenuate the signal itself, bias tremolo works by varying the bias voltage fed to the amp’s power tubes, giving the effect its unique character and almost magical dynamic qualities.

While other tremolos impose themselves on top of your playing, bias tremolo has the capacity to respond to it. As power amp gain increases, loud notes and chords are able to rise above the effects of bias modulation. Digging in harder allows you to “play over” the tremolo effect, before letting it fade back in as the note dies away or you soften your pick attack.

The RevivalTREM’s amp-like circuitry reproduces this effect exactly, right down to the complex interaction between gain, bias voltage, playing dynamics and harmonic content.

Voiced after our treasured 1962 Brown Deluxe, the RevivalTREM serves up a range of rich and complex valve amp tones with stunning authenticity.

From gritty cleans through throaty and articulate break-up to growling Tweed-style distortion, the RevivalTREM’s repertoire of elusive Brown Fender tones is at your disposal, with or without the independently switchable bias tremolo effect.

Meanwhile, the powerful Post-Drive EQ section, as seen on the RevivalDRIVE Compact, tailors the output of the pedal to suit the voicing of the amp you’re plugging into, as well as flat-response power amps, mixers and recording interfaces.

With high-quality components throughout, the RevivalTREM is designed and built for professional performance and rock-solid reliability.

Please note: the RevivalTREM is powered by a mains adaptor only (not included). We’ve dispensed with the usual 9V battery option, both to save space and to allow us to adopt a high-current approach, yielding lower noise levels and superior tone.

The Effect Factory applies a two-year replacement warranty for all manufacturer issues. For more details please visit our page terms and conditions.

Shipping in France and Belgium.

For international shipping please refer yourself to the terms and condition.

If you are not 100% satisfied with your purchase you may return it for a full refund. The return must be done within a maximum of 14 day after the receiving date. A return form must be attached to the returning product. In order to have the return form please send us an email with the purpose of your return. For more details please visit the terms and conditions.

There is no review for RevivalTREM

Free shipping to France from 150 Euros

with Credit card, Visa and Paypal

Above all the catalog